Start a Wiki
watch 01:51
The Loop (TV)
Do you like this video?
The unnamed 911 Operator (Kirsten Gibson) is a villainess from the 2004 film, Shower of Blood. She is briefly shown receiving a call from Lisa, one of the protagonists, regarding vampires coming after her and her friend Heather. The blonde dismisses the story and warns Lisa that she could face being charged with emergency fraud, but Lisa tells her to send the police.

At that moment, the blonde is revealed as a vampiress, as she is shown displaying her fangs while another vampire kisses the back of her neck. The villainess told Lisa that she'll send someone to her home, all while hissing and smiling evilly. 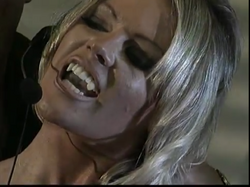 The evil blonde revealed as a vampiress
Add a photo to this gallery
Retrieved from "https://femalevillains.fandom.com/wiki/911_Operator_(Shower_of_Blood)?oldid=178199"
Community content is available under CC-BY-SA unless otherwise noted.